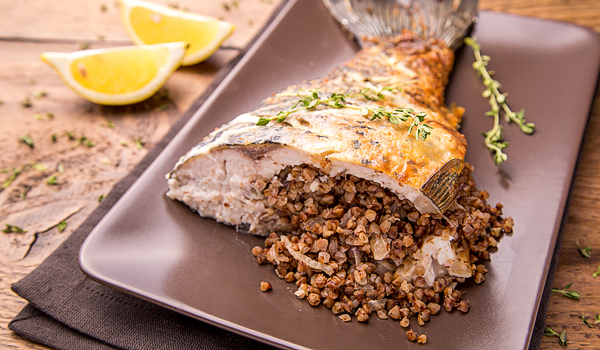 1. Clean the carps, make a vertical incision from the head to the tail and remove the insides. Remove the gills with a sharp knife or culinary scissors. Do not cut off the head or the tail. Wash the fish thoroughly and make a mesh of thin cuts along the sides.

2. Roast the buckwheat on a very hot pan for a minute, mixing constantly.

3. Bring 200 ml of water to a boil, put in the buckwheat, add salt, cover and cook for 10-12 minutes until the water is fully absorbed. The grain must be slightly undercooked.

4. Peel the onions and cut them into thin semi-circles. Heat the oil in the saucepan and fry the onions for 5-7 minutes until golden. Peel and chop the garlic and add to the pan with the buckwheat and 2 tbsp of sour cream. Mix thoroughly and cook for 5 minutes.

5. Fill the carps from head to tail with the mixture. Try to pack in the filling as tightly as possible. Rub the fish with salt and pepper and roll it in breadcrumbs.

6. Heat the oven to 200°С. Place the carps on the baking sheet with their undersides touching each other. In 15 minutes remove the fish, baste with sour cream and bake for 35-40 more minutes. Serve immediately.