﻿ Millet Croquettes with Spinach and Yogurt

Millet Croquettes with Spinach and Yogurt 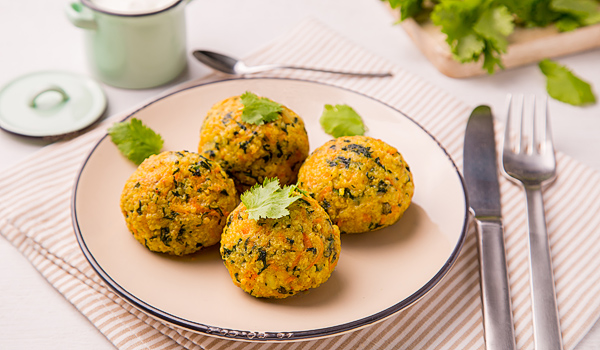 3 packets of Makfa millet in packets

1. Pour water in a saucepan, add salt and bring to a boil. Shake the packets with millet and gently lower them into the water. Reduce heat and cook the millet for 20 minutes until ready. Cool the millet slightly, remove from packets and place in a large bowl.

2. Peel the shallot, the carrots and the garlic, wash the spinach. Chop the onion, the garlic and the spinach and grate the carrots coarsely. Heat 1 tsp of olive oil in a stewpot and fry the shallot for 3 minutes until soft. Add the spinach and the carrots, and cook for 2 minutes, stirring occasionally. While stirring, add the garlic, curry powder, 1/2 tsp of salt and 1/4 tsp of pepper and cook for 30 seconds until the flavor is released. Place the mixture in the bowl with the millet and wipe the frying pan with a paper towel.

3. While mixing, add the flour, the yogurt, the egg and the cilantro into the millet mix. Separate the mixture into eight portions, form 1.5 cm thick croquettes, roll them in bread crumbs and place them on the baking sheet covered with parchment. Let stand for 30 minutes until the croquettes are cool and solid.

4. Heat the oven to 180 °С. Baste the croquettes with olive oil and cook for 10 minutes until golden.

5. Mix all the ingredients for the sauce. Serve the croquettes with the sauce.

3 packets of Makfa millet in packets