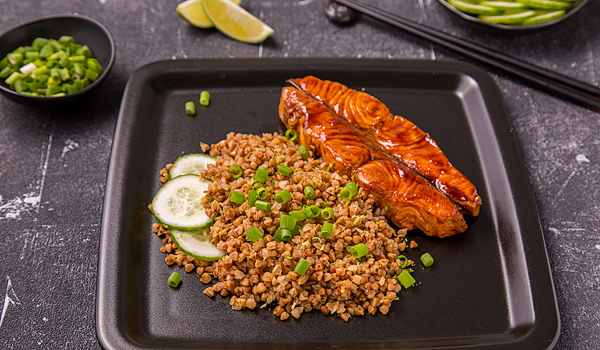 2 packets of Makfa buckwheat in packets

juice and zest of 1 lime

For the teriyaki sauce

1 tbsp of peanut or sesame oil

680 g of salmon fillet with skin

1. Pour water in a saucepan, add a little salt and bring to a boil. Shake the packets with buckwheat and gently lower them into the water. Reduce heat and cook the bucwheat for 7 minutes until ready. Let cool and remove the buckwheat from the packet.

2. Place the buckwheat into a bowl, mix with soy sauce, the peanut oil, the honey, lime zest and juice, and the ginger. While mixing, add thin strips of the cucumber and the green onion. Mix and keep warm while preparing the salmon.

3. Prepare the sauce. Mix the sake, the rice vinegar, the soy sauce and the ginger in a bowl.

4. Heat the peanut or sesame seed oil in a large pan on medium heat. Sprinkle the fish with sugar and place on the pan skin down. Fry for 2 or 3 minutes until crisp and golden. Turn over the salmon carefully and cook for 2-3 more minutes until it is caramelized. Take the fish carefully off the pan.

5. Wipe the pan and pour in the teriyaki sauce. Bring to a boil and cook for 3-5 minutes; the sauce must be reduced by 1/3. Place the salmon in the pan skin up and cook for two minutes.

6. Serve the salmon with the buckwheat, add the teriyaki sauce in the pan on top.

2 packets of Makfa buckwheat in packets

juice and zest of 1 lime

For the teriyaki sauce

1 tbsp of peanut or sesame oil

680 g of salmon fillet with skin