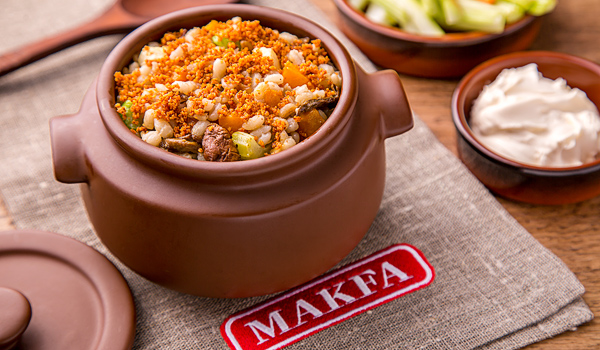 5 tbsp of vegetable oil for cooking

300 ml of meat or mushroom broth

2. Melt the butter in a saucepan and fry breadcrumbs on medium heat for 3-4 minutes until golden. Remove from the heat and mix with the paprika.

3. Cover the mushrooms with water and set aside for 10-15 minutes.

4. Peel the red onion. Cube the pumpkin, the celery and the onion and fry them on high heat with vegetable oil until golden.

5. Wash the mushrooms, chop them coarsely and add to the fried vegetables together with the cooked pearl barley and sour cream. Add salt and pepper.

6. Place the vegetable mixture into baking pots or forms. Cover with the broth and sprinkle with bread crumbs with paprika.

5 tbsp of vegetable oil for cooking

300 ml of meat or mushroom broth