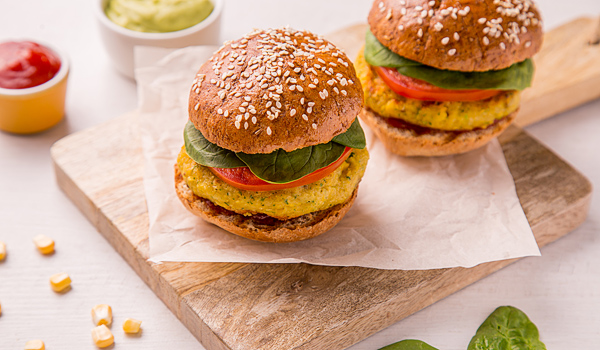 1. Bring water to a boil, shake the packets with peas and gently lower them into the water. Reduce heat and cook peas for 30-35 minutes until ready. Remove the peas from the packets and cool them to room temperature.

2. Drain water from the corn. Place the peas and the corn into a food processor.

3. Separate leaves from the stems of cilantro, add half of them to the food processor together with the stems. Add spices, lemon zest, 3 tbsp of flour and a pinch of salt. Blend into homegeneous texture.

4. Place the pea mix onto the surface sprinkled with flour, separate into six parts and make six cutlets. Place the cutlets on a tray and refrigerate for thirty minutes.

5. Heat vegetable oil in a large saucepan on medium heat and fry the cutlets for 5 minutes on both sides until golden.

6. Prepare the vegetables. Separate the leaves of the lettuce, wash them and dry them thoroughly. Wash the tomatoes and cut them into thin pieces.

7. Assemble the burgers. Place the buns in the toaster, and cut them in half. Baste the lower half of the bun with 1 tbsp of ketchup. Put the pea cutlet on the bread, top with a couple slices of tomato, 3-4 leaves of spinach, and the remaining cilantro leaves. Cover up with the other half of the bun, and serve.